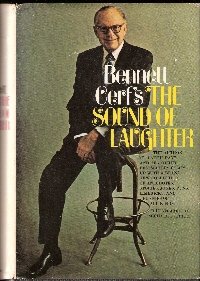 “The most wasted of all days is one without laughter.” by Nicolas Chamfort, a French Writer

Laughter has a healing power. I feel light after a good laugh. Hence I ask my hubby to dance often! It acts as a great stress relief after a long day. I happened to read the book “The Sound of Laughter” by Bennett Cerf. It is a collection of short jokes on various categories like animals, marriage, anecdotes, children, musicians and so on. For the last couple of weeks, I have been reading this book, while cooking, at bed time, after work, unable to put it down.

In school days I collected “sayings” or “thoughts” and jotted down in a book and named it “Realities of Life”. It became my (secret)hobby. I hid the book like a treasure showing it to only few of my friends. Basically anything nice I came across, I liked to make a note of it. For the same reason I am writing this post. These are 40 something out of I don’t know some thousands of jokes from the book, just a sample from the ocean in which I took a dip and came out laughing! By sharing I am contaminating you with the Laughter disease! It includes puns from Bernard Shaw, Mark Twain,Yehudi Menuhin. Read on and have some fun:

On the wall of a publisher’s office hangs a quotation from Clarence Day that will bring cheer to everyone who loves to read good books:

The word of books
Is the most remarkable creation of man.
Nothing else he builds lasts.
Monuments fall,nations perish,
Civilizations grow old and die out
And, after an era of darkness,new races build others.
But in the world of books are volumes
That have seen this happen again and again
And yet live on, still young,
Still as fresh as day they were written,
Still telling men’s hearts
Of the hearts of men centuries dead.

A canny and sophisticated young sophomore is purported to have mailed this letter to her long-suffering parents: “Dear folks: I have two pieces of news for you. First I’m going to have a baby, and have no idea who the father may be. Second, I’m afraid I’ve flunked both History and Economics this term. Now hold on a moment, Mom and Dad! The first piece of news is a pure fabrication. DOESN’T THAT MAKE YOU FEEL JUST A LITTLE BIT BETTER ABOUT THE SECOND?Love, Debbie.”

Pert Barbara Felton admits she was slightly discombobulated at her home the other morning. She was taking a bath when the doorbell rang. Grabbing a small towel, she made for the door and asked, “Who’s there?” “Blind man”, was the reply. Barbara opened the door to discover fine figure of lad who inquired appreciatively, “Where do I put these blinds?”

“How is that difficult kid of yours doing at the new school you put him in?” asked one commuter to another. “Let me put it this way,” was the answer. “I’m still going to the PTA meetings under an assumed name.”

An elephant was frolicking happily in a swimming pool one day, when a mouse came along and implored him to come out of the water. The elephant ignored the mouse for a while, but it became so insistent that the elephant finally lumbered out of the pool to demand, “What on earth do you want?”. The mouse squeaked, “I just wanted to see if you were wearing my bathing suit.”

There’s an animal trainer who’s been haunting the agents’ headquarters with a great big brown bear who, he claims, is in a class my himself as a clown, juggler, bicycle rider, skater and heaven knows what else. One agent stopped the boastful owner cold by inquiring, “If this bear of yours is so smart, how come he got caught?”

One of the most  trusting souls in America must be humorist P.G. Wodehouse. When he writes a letter, he disdains walking to post box to mail it. He just seals it, affixes a stamp, and throws it our of his third story window , convinced that some good-natured passer-by will pick it up and mail it for him. He insists, furthermore, that not one of his letters has yet done astray.

Steve Allen, sick and tired of being asked if he wears a toupee , assured one nosey housewife, “The hair is absolutely real ma’am;it’s the head that’s a fake.” Another humorist, Don Herold, made not the slightest effort to camouflage his shiny plate.”There’s one thing about baldness” he asserted. “It’s neat” Sam Hoffenstein summed up the situation as follows:

“Babies haven’t any hair;
Old men’s heads are just as bare.
Between the cradle and the grave
Lies a haircut and a shave.”

Mark Twain once was asked by a lady admirer if he believed in luck. “Certainly,” he replied. “How else can you explain the success of those you detest?”

Mr.Pulsifer Henpeck was deeply shaken when his first-born turned out to be a girl. “Why are you taking it so to heart?” he was asked. “Confound it,” grumbled Mr. Henpeck, “I was hoping for a boy to help me with the housework!”

A kindly old lady stopped a toddler at Miami beach and asked, “What’s your name?” The toddler answered, “Morris” “Morris what?” persisted the old lady. “What’s your last name?” “My last name?” pondered the toddler momentarily, then said brightly, “Oh, I know. Morris stop that Immediately.”

A little boy worrying through his very first day at school, raised his hand for permission to go to the washroom, then returned to the class a few moments later to report that he couldn’t find it. Dispatched a second time that explicit directions, he still couldn’t find it. So this time the teacher asked a slightly older boy to act as a guide. Success crowned his efforts, “We finally found it,”  he told the teacher. “He had his pants on backwards.”

Old Lady Abernathy hadn’t seen her young grandson since his christening and when she heard he was being sent up to her country place to spend his ninth birthday with her, she was so delighted she put five dollars in the collection plate that Sunday at church.The Sunday after her grandson went back home she put in ten dollars.

Letter received by elementary school teacher in Bronx: “Please never hit our Sylvester again. He’s a delicate, sensitive boy and is not used to corporal punishment. We NEVER hit him at home except in self-defense.”

At a girls’ college in Indiana some years ago, dates were permitted only on Friday and Saturday nights, but one brash young suitor, sorely smitten by Miss Susan Swanson, popped up on Tuesday, saying it was imperative that he see Miss Swanson immediately. “You must know our rules,” the dean reprimanded him. “What’s this great emergency?” I can’t even tell you,” said the suitor. “You see, I want to surprise her. I’m her brother.” “She’ll be surprised, I reckon,” said the dean. “But how do you think I feel? I’m her mother!”

The University of Oregon chess club was having some difficulty recruiting new members, until its ingenuous president inserted this classified ad in the campus daily: “DO YOU KNOW HOW TO MATE? If not, come to room 15 in the Student Union this Thursday at 6:00 pm and learn the basic positions.” The response was electrifying. 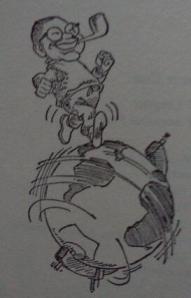 One of the Washington’s loveliest hostess boasts of the day, just after her presentation at Court, when she found herself seated next to the bewhiskered George Bernard Shaw at dinner. She murmured to him, “Mama says I should steer clear of the question of your age.” “Is that so?” nodded Shaw. “Well, how old would you say I am?” “Eighty-Eight?” she hazarded nervously. Shaw reached under the table, pinched her knee sharply, and chuckled, “I am, am I?”

Near-sighted bandit holding up a bank: “On the double, now, everybody get your hands up. …. Are they up?”

At the Raffles club: “When I got the bill for my operation, I found out why they wear masks in the operating room.”

The answer man on a metropolitan newspaper was stumped recently by two questions submitted by teenage readers: 1. Is it true that goats’ right legs are shorter than their left legs so they can stand on hillsides? (He took a chance and answered “Nonsense!”) And 2. Which way does a dog wag his tail: right to left, or left to right? (He answered, “I guess it depends on which way the wind is blowing.”)

Small boy to slightly smaller girl: “Are you the opposite sex, or am I?”

Triumphant father to mother watching their sixteen-year-old son mow the lawn: “I told him I lost the car keys in the tall grass.”

High school girl to classmate: “I wrote to eleven colleges and one had the best rating: 1522 boys and 177 girls.”

Weary gent at the same party: “I’m exhausted. I think I’ll start flirting with some mini skirted debutante so my wife will drag me home.”

Conceded an irascible businessman: “I’ll give my wife credit for one thing. She’s always ready to listen to both sides of an argument-so long as it’s in the next apartment.”

A regular patron at Shnops’ bar reports that he and his girl can’t seem to agree on wedding plans. “She wants a big church wedding with ushers and bridegrooms-and I just don’t want to get married.”

Call from a bride, just finished cooking one of her very first meals: “Dinners ready, darling.Come and guess it.”

Winston Churchill once was asked if he knew any professional women. He answered promptly, “I’ve never met any amateur ones.”

In Las Vegas, the owners of the posh and crowded Caesar’s Palace arre very annoyed-but very-with the fresh kid who has opened an orange juice stand nearby. He’s calling it Squeezer’s Palace.

Discouragement: watching your secretary yawn while typing one of your most amusing letters.

A lady doing her Christmas shopping asked a clerk, “What can you suggest for a man of fifty?” The clerk answered, “A girl of eighteen.”

Absent minded professor Headman sat in the hospital reception hall waiting the arrival of his first baby in the delivery room upstairs. A smiling nurse finally popped her head in the door to exclaim, “Congratulations, Professor! It’s a boy” Professor Headman looked up from his philosophical treatise to snap petulantly, “Well, what does he want?”

“I want a tooth pulled,” an imperious lady told a Cape Cod dentist, “and I don’t want any anesthetic, because I’m in a hurry.” Impressed with her bravery, the good doctor asked which tooth it was, “Donald,” said the lady, turning to her husband, “show him your tooth.”

Have you heard about the fellow who never worried about his marriage until he moved from Chicago to Los Angeles and discovered he still had the same milkman?

Bernard Shaw, reviewing the debut of an over publicized violinist, wrote, “Herr So-and -So last night left not only his contemporaries but his accompanist far behind.”

When disagreement rears its head,
My spouse and I don’t fight:
We talk it over calm ’til
We find out why she’s right
-Dick Emmons

The late Arturo Toscanini once played host to violinist Yehudi Menuhin. The later was in the middle of a sonata when the maestro’s private phone began to ring. Toscanini gestured to Menuhin to continue playing, picked up a pair of scissors, calmly cut the phone wire in two, then leaned back happily to continue listening to the music.

View all posts by Dhriti

3 thoughts on “The Sound Of Laughter”

Blogging Vogging by Dhriti is licensed under a Creative Commons Attribution-NonCommercial-NoDerivs 3.0 Unported License.