A cloudy weather bores me. In south east US it used to get dark very early in winter. By about 3 or 4 in the afternoon thick dark clouds covered the sky blocking even a single trace of Sun ray. Having just arrived from my home town which has lovely tropical climate, first thing I disliked in US was the boring and depressing weather.Boredom sometimes took me to depression. It required preparation to step out of the house even for a short evening stroll. We had to load ourselves with layers of clothing , wear mufflers, hand gloves and  winter hats. The night sky had no stars which was a big disappointment for me.

Many afternoons I sat on the couch looking out of the window, staring at the trees and watch it get dark. Solitude was my companion till my husband came home. At times I enjoyed my Solitude by listening to music, watching movies and cooking in order to avoid the gloomy weather. We lived in college campus in a pretty and small fairy-tale town. Ours was the last apartment in the whole block. I hardly saw people around and my ears went deaf due to silence (sometimes I spoke to myself to make sure my ears worked fine). I would think about my parents who would be fast asleep at that time. Having nothing much to do I sat in silence, again watching outside, the same trees, the same scene though it remained still and unchanged even after several hours.

I found one other companion who was busy all day. I wondered where he went and what he did. He constantly came to his house and left the very next minute. I wanted to ask him if he ever felt bored like me! If at all I could talk to him! I named him ‘Rama’ and started addressing him by this name. I watched his movements and his day to day routine. He carried on his activities unaware of the fact that I was spying on him. He became my lover in my Solitude till my husband came. I wanted to hold him and give a small peck on his cheeks! He seemed to be undaunted on a windy or a rainy day. He had the attitude of ‘Come what may!’, he seemed devoid of worries. It looked like nothing could ever stop him or alter his moods. Sometimes I wondered if he had emotions at all?

One day we left the town, I missed him. I wanted to take him with me to my new city, give all the love in return for his companionship in my Solitude. But then that was his home, may be he was born there and raised and is going to die there. For a short span of time he was my companion in my Solitude, in my boredom. Wish Rama could read this, he would feel good or feel ‘who cares’!!

I am glad I have a photo of his for my memory, my only other lover and boyfriend (as my husband teased me) ‘Rama’. I was once very angry at him, he spoiled my mint plants I planted outside my apartment! 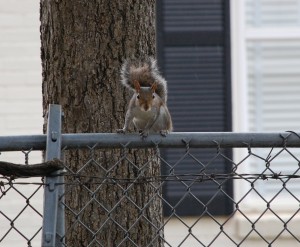 It reminds me of Rabindranath Tagore‘s poem I studied back in school.

Child, how happy you are sitting in the dust, playing with a broken twig all the morning.
I smile at your play with that little bit of a broken twig.
I am busy with my accounts, adding up figures by the hour.
Perhaps you glance at me and think, “What a stupid game to spoil your morning with!”
Child, I have forgotten the art of being absorbed in sticks and mud-pies.
I seek out costly playthings, and gather lumps of gold and silver.
With whatever you find you create your glad games, I spend both my time and my strength over things I never can obtain.
In my frail canoe I struggle to cross the sea of desire, and forget that I too am playing a game.

View all posts by Dhriti

Blogging Vogging by Dhriti is licensed under a Creative Commons Attribution-NonCommercial-NoDerivs 3.0 Unported License.